Before joining the Army Bill worked as an Auto Mechanic. After joining the Military he took up the MOS of Auto Mechanic where he was Sergeant of the Motor Pool with the 603rd Engineers, Company D.

Later on he was assigned to the 23rd H.Q. Special Troops. Later becoming known as the Ghost Army. The Ghost Army was an Allied Army tactical deception unit during World War II officially known as the 23rd Headquarters Special Troops (Operation Quicksilver). The 1,100-man unit was given a unique mission within the Allied Army: to impersonate other allied Army units to deceive the enemy.

During the war, Bill’s unit was very active in many of the now famous campaigns. This included;

After returning home from the war Bill settled down and married his wife Dorothy McNalley. They had one son, William Enoch Jr.

Later on Bill joined VFW Post 3117. Bill was quite active and worked tirelessly many hours to ensure the success of the organization. Bill used his construction and mechanical experience to keep the post building and grounds in top notch condition. As the years went by, the old post building unfortunately had to be shut down. Not to be deterred, Bill and other members of the post set themselves on a new mission. To build a new Post 3117. That new building is now operational and is a center for veteran’s activities here in Edison Township. Bill being just 97 years young is still an active member of the VFW organization. He attends most business meetings where he is a role model for the younger members. Bill’s spirit is as strong today as it was when he was protecting our country during WWII.

Bill is a recipient of the following Awards and Decorations;

Bill Enoch reflects great credit upon himself, Post 3117, and the Veterans of Foreign Wars.

Please rate our posts, we consistently look to improve our content.

No votes so far! Be the first to rate this post. 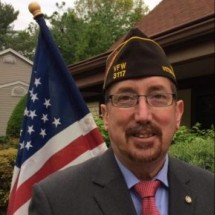